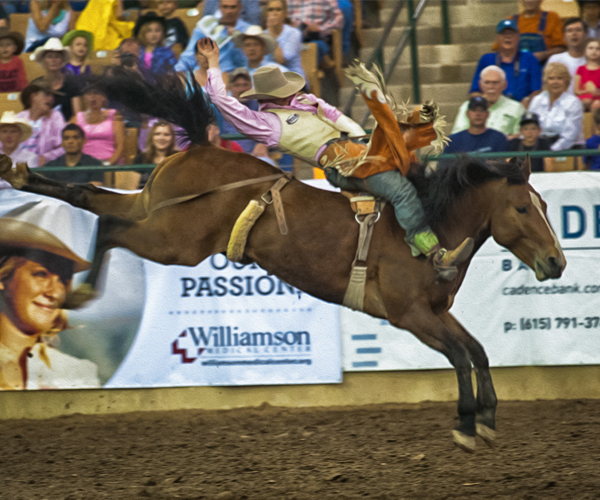 To stay aboard the horse, a bareback rider uses a rigging made of leather and constructed to meet PRCA Rodeo safety specifications. The rigging, which resembles a suitcase handle on a strap, is placed atop the horse’s withers and secured with a cinch. As the bronc and rider burst from the chute, the rider has to mark out his horse. In other words, he must have both spurs above the horse’s shoulders until the horse’s feet hit the ground after its initial move from the chute. If the cowboy fails to do this, he is disqualified. As the bronc bucks, the rider pulls his knees up, dragging his spurs up the horse’s shoulders. As the horse descends, the cowboy straightens his legs, returning his spurs over the point of the horse’s shoulders in anticipation of the next jump. 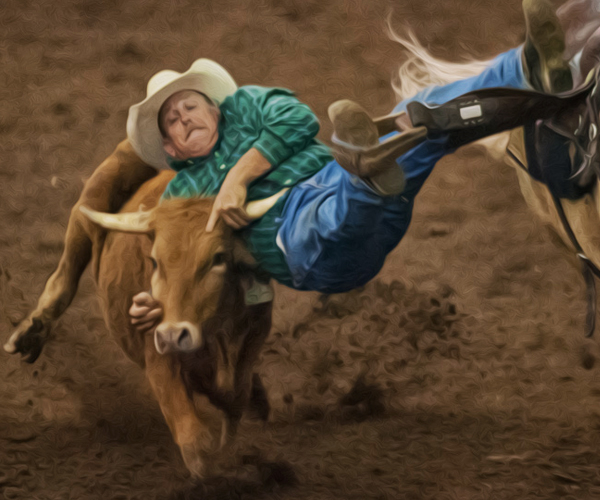 The cowboy’s objective is to use strength and technique to wrestle a steer to the ground as quickly as possible. Sounds simple enough. The catch is the steer generally weighs more than twice as much as the cowboy trying to throw it. The need for speed and precision make steer wrestling, or bulldogging as it is commonly known, one of rodeo’s most challenging events.

When the cowboy reaches the steer, he slides down the right side of his galloping horse, hooks his right arm around the steer’s right horn, grasps the left horn with his left hand and, using strength and leverage, wrestles the animal to the ground. His work isn’t complete until all four of the animal’s feet face upward.

In order to catch up to the running steer, the cowboy uses a hazer, another mounted cowboy who gallops his horse along the right side of the steer, keeping it from veering away from the bulldogger. The hazer can make or break a steer wrestler’s run, so his role is as important as the skills the bulldogger hones. 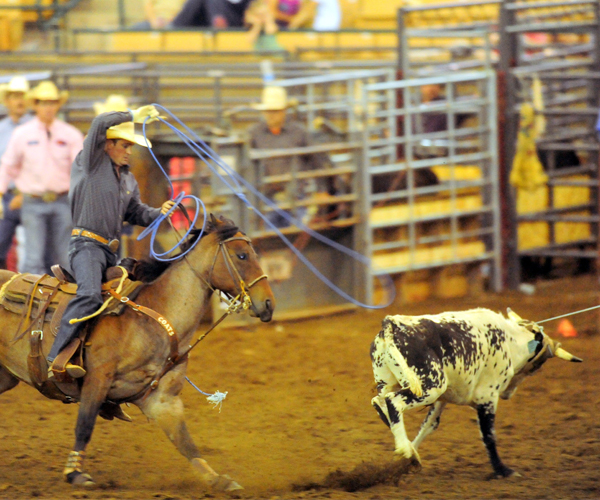 Team roping requires close cooperation and timing between two highly skilled ropers – a header and a heeler. The event originated on ranches when cowboys needed to treat or brand large steers and the task proved too difficult for one man. As in other timed events, the team ropers start from boxes on each side of the chute from which the steer enters the arena. The steer gets a head start determined by the length of the arena.

One end of a breakaway barrier is attached to the steer then stretched across the open end of the header’s box. When the steer reaches its advantage point, the barrier is released and the header takes off in pursuit, with the heeler trailing slightly further behind. If the header breaks the barrier before the steer completes its head start, the ropers are assessed a 10-second penalty.

The header ropes first and must make one of three legal catches on the steer – around both horns, around one horn and the head or around the neck. Any other catch by the header is considered illegal, and the team is disqualified.

After the header makes his catch, he dallies the rope, turns the steer to the left and exposes the steer’s hind legs to the heeler. The heeler then attempts to rope both hind legs. If he catches only one foot, the team is assessed a five-second penalty.

After the cowboys catch the steer, the clock is stopped when there is no slack in their ropes and their horses face one another. 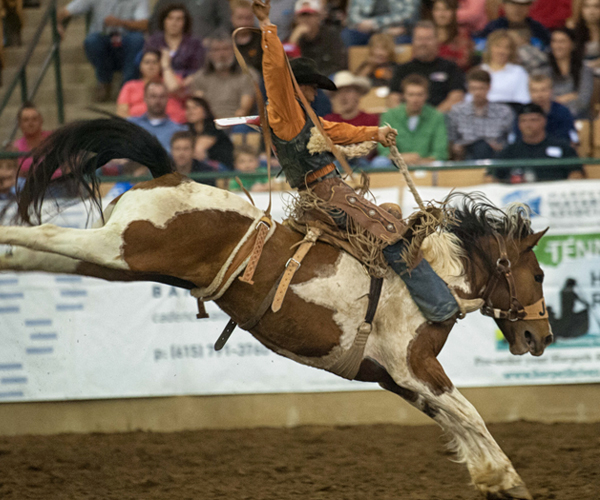 Saddle bronc riding requires strength, but it is as much about style as anything: grace and precise timing are mandatory. Saddle bronc riding evolved from the task of breaking and training horses to work the cattle ranches of the old West. Many cowboys claim riding saddle broncs is the toughest rodeo event to learn because of the technical skills necessary to master it. 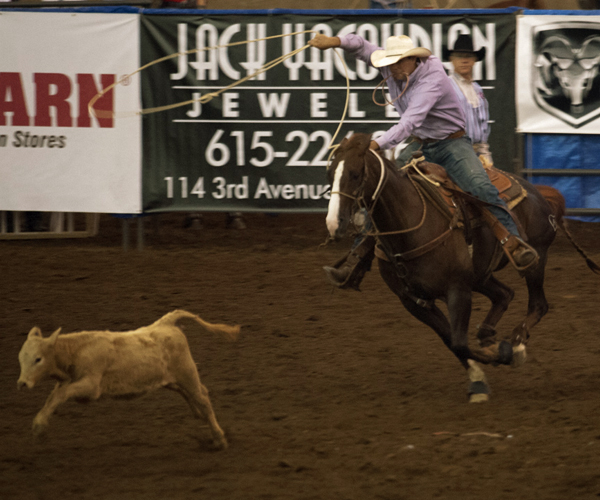 More than any other event in professional rodeo, Tie Down Roping has roots dating back to the working ranches of the Old West. When calves were sick or injured, cowboys had to rope and immobilize them quickly for veterinary treatment. Ranch hands prided themselves on how quickly they could rope and tie calves, and they soon turned their work into informal contests.

In today’s modern rodeo, the mounted cowboy starts from a box, a three-sided, fenced area adjacent to the chute holding the calf. The fourth side of the box opens into the arena. The calf gets a head start determined by the length of the arena. One end of a breakaway rope barrier is looped around the calf’s neck and stretched across the open end of the box. When the calf reaches its advantage point, the barrier is released. If the roper breaks the barrier before the calf reaches its head start, the cowboy is assessed a 10-second penalty.

When the cowboy throws his loop and catches the calf, the horse is trained to come to a stop. After roping the calf, the cowboy dismounts, sprints to his catch and throws it by hand, a maneuver called flanking. If the calf is not standing when the cowboy reaches it, he must allow the calf to get back on its feet, then flank it. After the calf is flanked, the roper ties any three legs together with a pigging string – a short, looped rope he carries in his teeth during the run. While the contestant is accomplishing all of that, his horse must pull back hard enough to eliminate any slack in the rope, but not so hard as to drag the calf.

When the roper finishes tying the calf, he throws his hands in the air as a signal that the run is completed. The roper then mounts his horse, rides forward to create slack in the rope, then waits six seconds to see if the calf remains tied. If the calf kicks free, the roper receives no time. 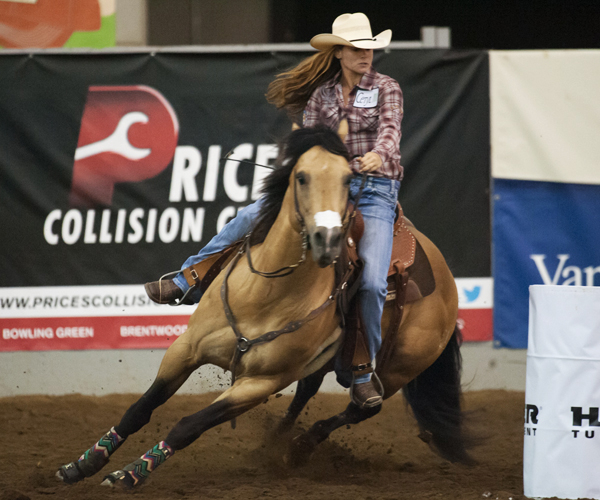 Barrel racing is one of professional rodeo’s most colorful and exciting events. The fast-paced contest ranks just behind bull riding in crowd popularity. Barrel racing began as a friendly challenge of horsemanship skills between cowgirls and has developed into a multi-million dollar professional sport. Matter of fact, in 1999, the world champion barrel racer took home the highest season earnings check of any professional rodeo athlete.

Once considered a sideline event of traditional rodeos, barrel racing is now an integral part of most PRCA rodeos. The lure and the thrill of barrel racing lies in the excitement of seeing equine athletes and their skilled trainers perform at their best. From the grandstands, the event seems simple. Horse and rider cross the start line at a run, follow a cloverleaf pattern around three barrels, then dash across the finish line. What is not seen are the years of practice required to train that horse to run barrels. The times of top riders are so close that electronic timing devices accurate to the hundredth of a second must be used.

Professional women’s barrel races are run under the direction of the Women’s Professional Rodeo Association. Formed in 1948 by a group of Texas women led by Blanch Altizer-Smith, sister of 1959 PRCA calf roping champion Jim Bob Altizer, the Girls Rodeo Association began as an effort to involve women in professional rodeo. There were 74 charter members and 60 approved events with a total payoff of $29,000 the first year. The GRA was renamed in 1982, and since, the WPRA has expanded its goals to include larger purses, bigger and better rodeos and greater public recognition of women’s rodeo. 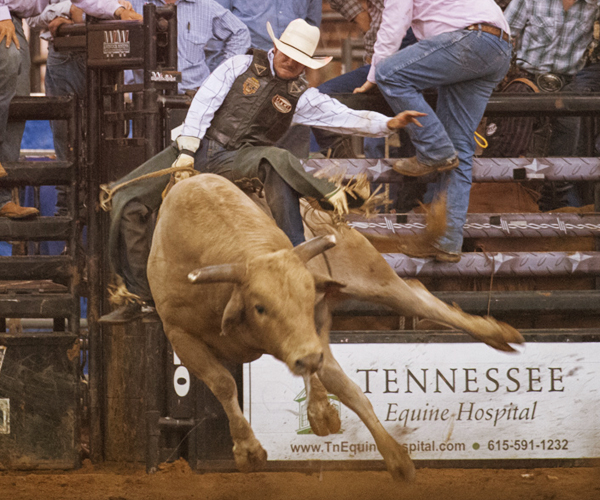 Bull riding has become rodeo’s most popular event. The risks are obvious. Serious injury is always a possibility for those fearless or foolish enough to sit astride an animal that weighs a ton and is usually equipped with dangerous horns. But cowboys do it and fans love it.

Bull riding is dangerous and demands intense physical prowess and supreme mental toughness, and the bull rider may use only one hand to stay aboard during the eight-second ride. If he touches the bull or himself with his free hand, he receives no score. But unlike the other roughstock events, bull riders are not required to mark out their animals. While spurring a bull can add to the cowboy’s score, riders are commonly judged on their ability to stay aboard the twisting, bucking ton of muscle and rage.

To stay aboard the bull, a rider uses a flat braided rope, which is wrapped around the barrel of the bull’s chest just behind the front legs and over its withers. One end of the bull rope, called the tail, is threaded through a loop on the other end and tightened around the bull. The rider then wraps the tail around his hand, sometimes weaving it through his fingers to further secure his grip. Then he nods his head, the chute gate swings open and he and the bull explode into the arena.

Every bull is unique in its bucking style. A bull may dart to the left, then to the right, then rear back. Some spin, or continuously circle in one spot in the arena. Others add jumps or kicks to their spins, while others might jump and kick in a straight line, or move side to side while bucking. 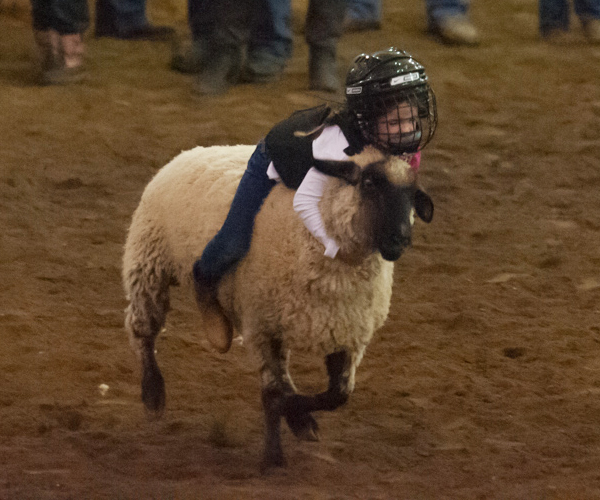 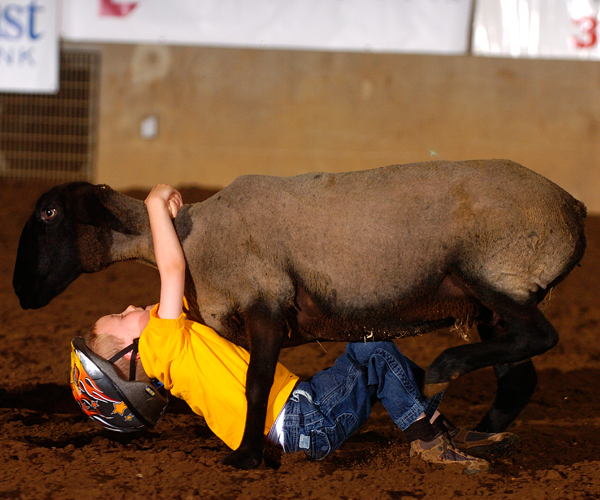 Calling all little Cowboys & Cowgirls in training!  Here’s your chance to get into the thrill of rodeo in mutton bustin’!

Many come.  Few are chosen.  Try your luck and enter!  Here’s the Rules: 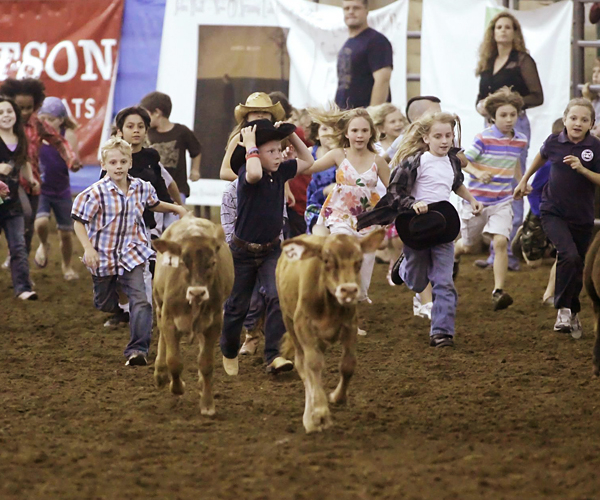 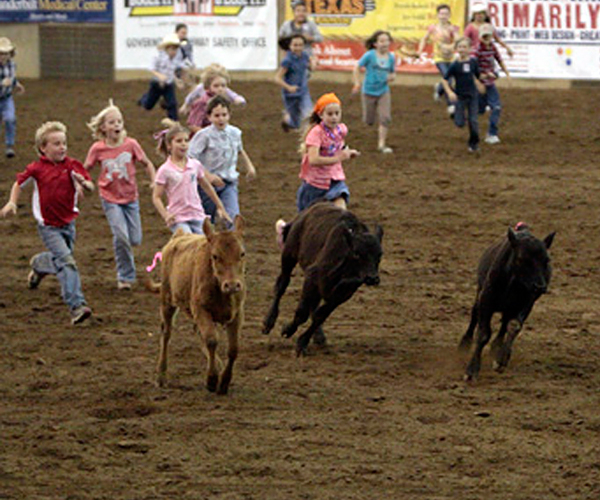 Calf Scramble is a great way for the kids to get up close and personal with some of our fuzzy little farm animals! There are two age groups: 6-9 and 10-12.  We place a ribbon on the tails of three calves and turn the kids and the calves loose.  The first three participants to return the ribbon to the clown wins a cash prize. Not responsible for lost boots, flip flops, hats or anything stepped in other than arena dirt!