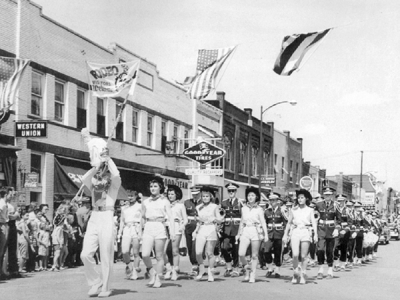 Since 1949, cowboys and cowgirls have stampeded to Franklin, Tennessee in early May to participate in what is billed as the largest rodeo east of the Mississippi. The Franklin Rodeo is a project of the Franklin Noon Rotary Club, which has now celebrated over seven decades of excitement since its beginnings.

The Franklin Noon Rotary Club was chartered January 13, 1948 with 14 members. Judge Jim Warren served as the club’s first president. Despite its humble beginnings, today the club has almost 150 members representing a large cross section of business backgrounds in one of Middle Tennessee’s favorite places to live.

For most members of the newly formed Franklin Rotary Club, this truly was their first rodeo

Soon after its creation, the newly formed club began looking for a fundraising project. Long-time Franklin Rotarian Jim Hayes remembers hearing about it. “Someone hit on the idea of having a rodeo, but there was a small problem. We had one man, Dr. Harry Guffee, who had actually seen a rodeo and a couple of other people who had migrated up from Texas,” Hayes relates. “Dr. Guffee, along with transplanted Texans John and Preston Fowlkes and Bob Corley were principals in carrying the torch,” according to Hayes. “Another significant person was Ed Moody, who managed the rodeo from the 1950’s until 1984.”

The first rodeo was planned for Saturday, May 6, 1949 with a parade leading up to it and was a rousing success. It was led by then Tennessee Governor Gordon Browning, local Rotarians and visiting cowboys. Bands from Franklin High School and the Columbia Military Academy also participated. About 1,000 4-H kids and their parents were in town and they joined in too. Many county residents rode their horses to town for the event so they also joined the parade. That started a tradition that goes on to this day.

Hayes said the rodeo’s first years were tenuous. “There were several times during the early history of the rodeo when the Rotary Club toyed with canceling it. They’d have one year where they’d make money and one where they’d have bad weather and lose money.” But the event went on, and Hayes attributes that to the character of Rotarians. “There were some strong beliefs among some members of the club that the rodeo would be a good long term event.”

During the past seven decades, the rodeo has produced over four million “bucks”

Over the past 70 years, over $4 million has been raised for community causes, including everything from college scholarships to medical care. Hayes said, “In the ‘60’s, there was a shortage of physicians, dentists, and trained nurses in our county. For many years the Franklin Noon Rotary Club gave scholarships to medical, dental and nursing schools. That financial aid produced a number of good doctors, dentists, and nurses.” Funds often also went to buy band uniforms and library books for the public schools. Following the 1950 rodeo, the Review Appeal newspaper printed, “Not only will the reader have the time of his life (at the rodeo), but he is assured that his 60 cents (admission) will be spent wisely – adequate uniforms for the FHS band.”

Hayes believes the rodeo is part of the fabric of the community. “We were an agrarian community—we were farm oriented, and for rodeo week, it became the main thing we did and the biggest event to happen in Franklin year round.”  Hayes added that even though the population of Williamson County has grown exponentially and has shifted away from agriculture, the rodeo is still woven into the fabric of the community.  It’s become a Franklin tradition!

Today’s rodeo progressed over the years and looks a lot different than the first one held in 1949. The rodeo became sanctioned by the PRCA (Professional Rodeo Cowboys Association) in 2005, spans three nights, is held inside an air conditioned arena, and draws nationally ranked contestants and top bucking stock.  The 15,000 fan annual attendance exceeds the entire 1949 population of Franklin.  And the sixty-cent admission of that first rodeo won’t even buy a soft drink today.

But two things do remain the same—fans still have a good time and the community still benefits from the work of the Franklin, Tennessee Noon Rotary Club.